With entitlement programs requiring a growing share of the federal budget, benefit cuts and tax increases are likely in the future.

Here is a high-level view of US macroeconomics. The current Federal budget operates at ≈20% of GDP.

Let us take a closer, more detailed look at the expenditures from the $4T Federal budget for 2018. The entitlement programs, Social Security and Medicare, by themselves accounted for half of the budget, or about a ≈$1T each. Running the Federal government cost 19%, followed by 15% for Defense and 9% for Welfare Programs. Interest payments to service our National Debt was 7%. To see how balancing the federal budget may impact tax rates, read “The Future of Taxes.” 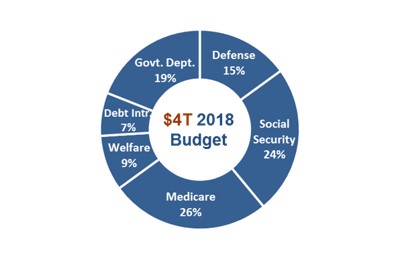 Now let us pare down the details behind the entitlement programs. The number of recipients and the cost of Social Security benefits and Medicare is expected to double over the next 30 years.

Both programs are running up a deficit that is projected to further balloon in the future. 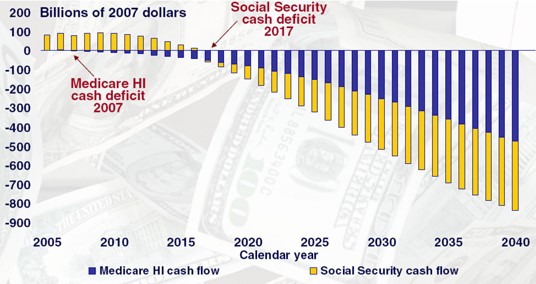 The fundamental factors which contribute to the entitlement program deficit include increased life expectancy, decreased worker-to-retiree ratio (now at 2.8), and increased healthcare costs. The budget control measures likely to be put in place to reign in the growing deficit may include reducing COLA (Cost- of-Living Adjustment) for Social Security benefits, increasing Social Security tax by 1% and/or the income cap, raising the full retirement age from 67 to 68, etc.

Thus, though the entitlement programs themselves may survive well into the future, their relative significance as a safety net is bound to diminish if proposed benefit cuts are put into effect.