S-Corp receives a favorable tax treatment when compared to a Sole Proprietorship, by splitting its earnings between Salary and Unearned Distribution, and in which the latter is not subject to Self-Employment tax.

The Self-Employment (SE) tax is the employee and employer portions of the FICA tax. The FICA tax has two components: Social Security tax at 15.3% up to $133K in wages and Medicare tax at 2.9% on the entire wage. Half of these taxes are paid by the employer and the rest by the employee. Employee also pays a 0.9% ACA surtax for Medicare on wages >$200K / $250K for Single/Married Filing Jointly (MFJ).

Sole Proprietors have to pay the SE tax on their entire net business income as reported on Schedule C. S-Corp owners can split their earnings into Salary and Unearned Distribution. IRS requires that the Salary be commensurate with the market rate. The rest of the earnings can be designated as Unearned Distribution and are not subject to SE Tax. The other differences between Sole Proprietorship, LLC, S-Corp and C-Corp are explained in our blog “Business Corporate Structures.”

SE tax is only calculated on 92.35% of the income because the employer portion, which is 7.65%, is tax deductible. The employer portion of SE tax is taken as a deduction on the 1040 Schedule 1 Adjustment. For a comprehensive view of the steps involved in the 1040 form please refer to “Income Tax Calculation Flow and Deductions.”

The QBI (Qualified Business Income) deduction is 20% of the net income reduced by employer portion of SE tax. The QBI deduction is taken “below the line” (after AGI is calculated). Our blog “Pass-Through Deduction” explains further how the QBI deduction works and gives examples. 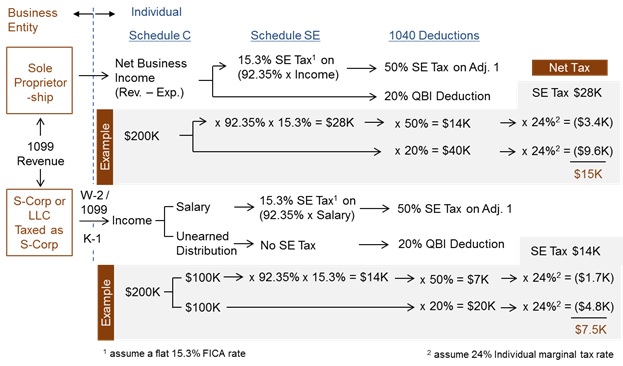 Let us look at an example in which the net business income is $200K. For simplicity, we will assume a flat FICA rate of 15.3% and ignore an SE tax adjustment to net income when calculating the QBI deduction. For Sole Proprietorship, the SE tax based on the entire income is $28K. Half of that amount (employer portion) is tax deductible.  Assuming a 24% marginal tax rate, the tax savings from both the SE and QBI deduction combined with the SE tax results in a net tax of $15K.

For a S-Corp or LLC taxed as a S-Corp, assume that the net income is evenly split between the Salary and Unearned Income parts. SE tax is only calculated on the Salary, which works out to $14K. Note that the SE deduction will be lower because of a smaller SE tax. Similarly, the QBI deduction will also be lower because Salary cannot be part of QBI. However, the SE tax savings more than compensate for the reduced deduction amounts, resulting in a much smaller net tax of $7.5K compared to a Sole Proprietorship.