The value of a nest egg is most subject to market fluctuations during the period right after one’s retirement. This is also called the sequence of returns risk.

Sequence risk is the impact that high/low sequence of market returns have on asset growth. It is one of the key factors discussed in our blog “Retirement Characteristics” that could profoundly impact retirement planning. Here, we explain the sequence risk using the analysis from Wade Pfau at Retirement Researcher. Consider a scenario in which the working and retirement periods are 30 years each. The sequence risk captures the percentage impact market return has on a particular year in our scenario. All the vertical bars add up to 100%. 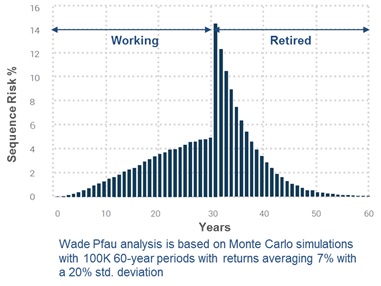 Pfau provides a market example to illustrate how withdrawals amplify sequence risk by looking deeper into Bengen’s popular 4% withdrawal rule (explained further in our blog “Retirement Rules”). The 4% rate corresponds to the worst-case retirement period (1966-95) in Bengen’s analysis. The actual market return during this 30-year period was 4.2% CAGR. However, the 1966 retirees who withdrew 4% of their nest egg every year as their retirement income only realized an asset growth rate of 1.99% CAGR during this period. This is because, the initial poor market returns could not be overcome by the better than average returns that followed in latter years.