We looked at two industry research studies about how to attain a sustainable retirement lifestyle. Money management fees and taxes are not included as part of the studies. Retirement income was inflation-adjusted.

The chart shows the retirement year and the MWR (as a percentage of asset value at retirement). At this withdrawal rate, the retiree would have completely used up the retirement asset after a 30-year period.

The worst-case scenario corresponded to the 1966 retiree whose retirement period was 1966-95. Based on the market performance during this period, the MWR was only 4% which was the lowest among all the years in the study, and hence formed the basis of Bengen’s recommendation. Poor initial market performance combined with constant withdrawal led to this year becoming the worst case, which is further explained in our blog “Sequence of Returns Risk.” 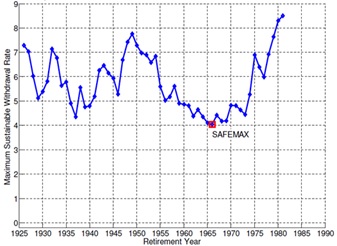 Pfau approached sustainable retirement lifestyle from the viewpoint of savings rate rather than withdrawal rate. His analysis showed that if one saves 16.62% (LMSR or Lifestyle based Minimum Savings Rate) of their salary every year, they will be able to withdraw up to 50% of their pre-retirement income as their annual retirement income. Each data point (retirement year) in his analysis is based on market performance for the preceding 30 years (working period) and the following 30 years (retirement period). The retirement assets were assumed to be invested in a 60/40 portfolio of S&P 500 and T-Bills.

The worst-case scenario for the LMSR corresponds to the 16.62% savings rate requirement for the 1918 retiree, which is the maximum recorded in this study. 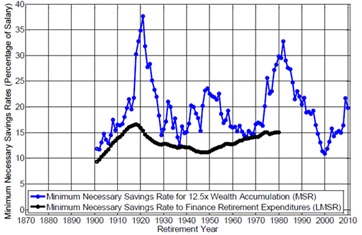 The recommendations from both of these studies (4% withdrawal and 16.62% savings rate) are based on worst-case analysis of historical market data. It means that all the retirees, except those who retired in the worse-case year, and who followed these recommendations, could have lived a less conservative lifestyle. Given that the variations in the LMSR curve is less than that of MSR curve, Pfau argues that following his recommendations meant less sacrifices for the overall population.

We compared different retirement scenarios, such as when retiring early or with different asset values, using FinCrafters Retirement Planning Calculator in our blog “Retirement Scenarios.”